The MRI event in Roseville was a perfect opportunity to introduce our new students to robotics competitions. We did great too! Our robot took 9th place and we were picked for the 4th alliance.

All seven teams are off the ground and running. At No Mythic this week, new and old members alike broke into groups to get an introduction to 9 different areas they might want to help with this year: Driving, Shop/fabrication, Image, CAD, Electronics/pneumatics, Accounting, Logistics, and Scouting. Next week, students will choose one area to focus on for a three-week project.

Interested in joining one of our teams this year? Act now!

Lego League at GRS: Wednesdays from 3:30-5:30 pm. First meeting September 21st in the garage. 5-8th graders. $125/student. We hope to have three teams, IF we get two parents to volunteer with each team. Interested? Sign up here: Lego League Signup.

FRC: Tuesdays from 4:30-8:30 pm at Great River School. 9-12th graders. Build a huge robot with a large team. $250/student. Meets once a week in the fall, three times a week in the spring. Interested? Come to the first meeting for new students is September 20th from 4:30-8:30 pm at Great River School.
Fees are on a sliding scale. The listed amount is a recommendation. Pay what makes sense for your family. Questions? Email 2491nomythic@gmail.com. 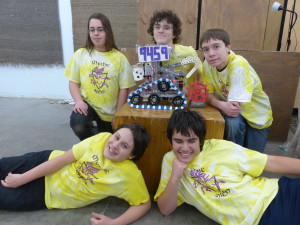 No pictures (we were too busy enjoying each other), but a good time was had by all as we gathered with friends, family, and sponsors to celebrate another fantastic year of 2491 No Mythic.

We won the Imagery Award!

During the second day of competition, the team had done well. We spent the day talking to other teams, getting pins, exploring the pits, and most importantly, the robot was able to not only breach defenses, but shoot both high AND low goals! But the real highlight of the day was toward the end. During that nights award ceremonies, the team was recognized for its team spirit, dapper purple clothes and accessories, as well as the pit design and how our robot looked. Here’s how the judges described the award:

“This team has no fear of being bold
Fortified within their strong hold.
They experimented through trial and error
While sporting manes of purple hair.
With idea and designs that were prolific,
So let’s hear it for No Mythic”

Introduction of the award: “The Imagery Award is in honor of Jack Kamen. This award celebrates attractiveness in engineering and outstanding visual aesthetic integration from the machine to the team appearance”.

We also just had a fabulous time. In the stands, our already sizable purple presence was swelled greatly by friends and relatives alike, who helped us cheer and shake our robot and drive team to success in match after match. Even when we lost the quarterfinals, our robot performed well! Getting the Imagery award just added icing to our tye-dye purple cake.

The time between competitions is so important. We’ve fixed up Aries, rebuilt the intake mount, fixed the shooter, remounted the motors, and started driving practice. The pit design crew has gone to town with chloroplast and foam. Our programmers are the stars this month – They’re debugging code to create both autonomous and teleop code that will be flexible and powerful.

Duluth was a blast. It’s our training ground – and boy did we learn a lot! Strategy, robot design, team branding, and scouting. We watched Mars go from a lump on the field to a defense-breaching robot. And we had fun. Next up – Minneapolis North Star Regional!

Our 2016 FIRST Stronghold robots: The Roman and Greek gods of warfare.

Our very own FTC team, 9459 “Mythic”, recently competed in one their competitions, and even won an award! The trophy (not shown in photos below) the recognized the team’s efforts in the engineering and structure of their robot.

The new game is the most playful yet – but still quite complicated. The team is hard at work prototyping shooters, intake mechanisms, field elements, and the team standard. They built the first parts on the new mill, and are just finalizing the CAD designs of the chassis.

Team NoMythic threw a party for our younger robotics teams on January 8th. We got to hear from each team, give well-deserved awards, and eat treats.