The Mindgears, the rookie team from Avalon, competed at Capitol Hill Magnet school in Saint Paul.

Team Athena and the Brickheads – December 12

Team Athena and the Brickheads, the two Lego League teams from GRS, competed in North Branch on Saturday. A great time was had by all, and Team Athena brought home a Team Spirit Award!

Helping others helps us – so this weekend, we volunteered to help at a lego league competition in St. Paul. We helped set up the rooms and fields, showed the little kids the big robot on Saturday and Sunday, and then helped to put the school back together after the competition.

The team set about to systematically train ourselves this fall. Students are teaching classes on programming, CAD, fabrication, pneumatics/electronics and operations. It hasn’t been smooth sailing, but we’ve all learned a ton!

A few team members attended a talk by Caleb Sykes, mentor for the Central Minutebots, about game strategy. Caleb walked us through a mock-kickoff event, and talked about the relationship between team goals and strategy. A timely event! Thank you, Caleb. His slides are posted on the Central Minutebot Resources website.

A great day was had by all at our last mini-regional of 2015. Thank you, Helios!

Parties are fun, and so is getting to know other robotics teams. Check out pictures on the Saint Paul Robotics HUB page.

Who knew that the multi-purpose space could be a theater? The team watched Slingshot, the movie about Dean Kamen and his inventions, especially his device to create clean water from just about anything wet. We were inspired.

Many hands made light work with tie dye today. We dyed 150 purple shirts, 30 yellow shirts, and a few hands.

Thanks to the Central Minutebots, some of the team attended a talk by Col Robert Cabana, former astronaut and head of the Kennedy Space Center. He encouraged the students to follow their passions. He told about his own struggles to get into flight school and NASA, where persistence paid off! He also shared many details about the U.S. space program. We were all inspired. Thank you Col Cabana and the Minutebots! 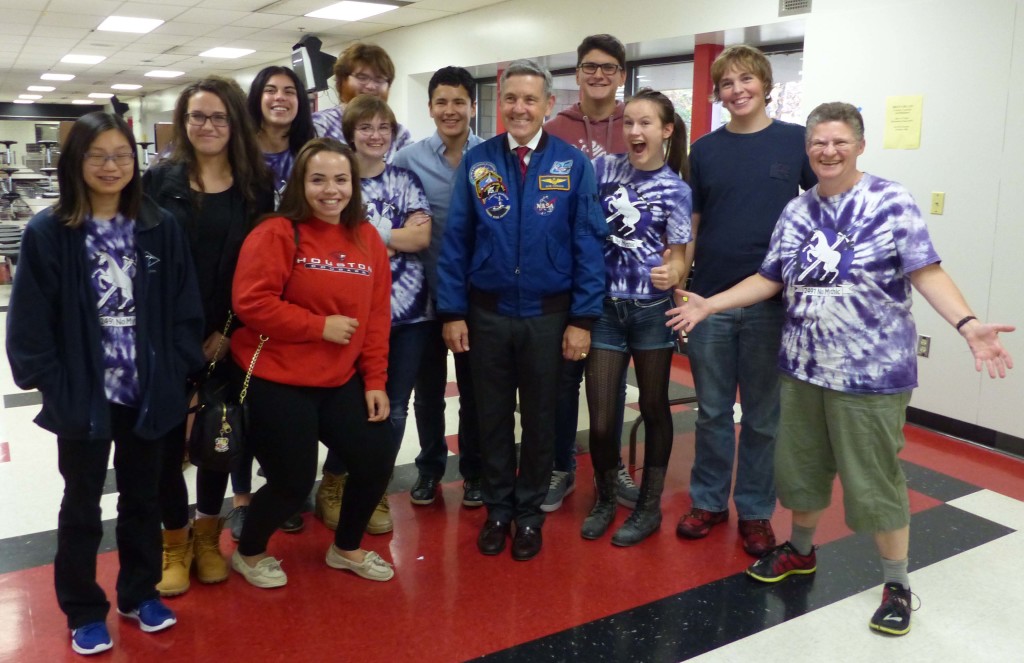 Really good design process skills will save us time during build, and focus our energy. We divided into teams tonight. The goal of each team was to construct a “stool” out of cardboard that was at least as tall as a shop stool, no heavier, held as many people as possible, and was aesthetically pleasing. Points were awarded, and a good time was had by all.

By the end of the day, team team ranked 11th place, even with newbie drivers. We got to see our fellow teams and remember how much fun this is. Thank you, Roseville Firebears!

Our second day at the fair was another success. We shared the stage with Highland Park Robotics

Robotics drew lots of spectators today at the fair, where they watched our team work with Team 2989 Star Tech demonstrate what robotics is all about. Afterwards, they got to ask the students about the program and try driving the robot.

The robot will be on display at the fair every day. Our team will be there doing demonstrations again on Thursday, September 3rd.

Isaiah whipped up this nifty video about the day!

This weekend six of us attended the GOFirst Summit, a day of sessions about robotics. We learned things, met people, and visited with friends on other teams. A success!

How many people does it take to move a 1,875 pound, 83″ tall milling machine from the loading dock to the shop? Five clever and persistent team members.

PACE Analytical has been a long-time visionary sponsor of the team. Team members visited their company today and gave a fantastic presentation about the team and our amazing year. PACE pledged support for another great  year!

Lake. Boats. Trust fall activities. S’mores. Mission/vision. The retreat was a great success on all counts!

Championship was …. amazing, inspiring, hard work, exhausting and joyful. Pretty much everyone did more than they thought they could, met and exceeded their goals, supported each other, and learned a ton. What more could we ask?

The St. Paul Hub is a group of the 8 or 9 FRC teams in Saint Paul. Today they threw a party for us, and for the Central Minutebots – supporting our teams on our journey to Championships. After an awkward start, the teams ate and then played some fierce Ga-Ga together. Thank you hub!

Thank you to the friends, family, sponsors, mentors and team members who filled the Avalon cafe last night at 2491’s end of year banquet. What a community!

Susan, Leeah and Laura were featured in this amazing DreamXchange video. They were also able to attend the annual DreamXchange banquet, meeting other alumnae and sponsors.

Check it out! Isaiah, Michael and Kelli were interviewed for MPR today. They’ll be live at 3:18 pm on 91.1, and online later at MPR Soundcloud.

This game is about doing our best – more than we thought we could do. Who would have thought that our robot would win this year’s game – but it did! Championships raises the bar again – meeting people and seeing robots from all over the world, soaking up the excitement for science, engineering and technology. It’s a dream come true.

But it’s expensive. It’s going to cost us around $800 per student. Families will cover $200/each. We have 2 weeks to raise the rest. Anything you can give will help us out. Check out our Donate page to see our progress and get fun gifts.

Winning may not be everything, but it sure was sweet! Our alliance with Wave Robotics (2826) and the Errors (3130) won the entire North Star Regional. Next stop – Championship in St. Louis! 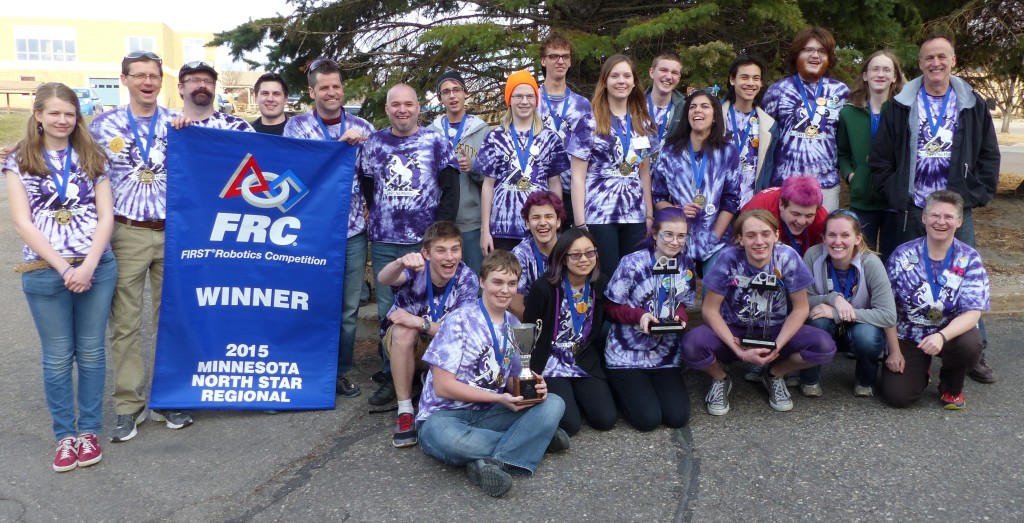 After starting the day in 57th place (out of 60), we ended at 32nd. It’s a good thing that winning is not our first or only goal! In fact, we’re more interested in learning, growing, loving robotics, and supporting each other.

Tomorrow we’ll still be at Mariucci. Our remaining qualifying matches are at 9 am, 10 am, and noon. Come cheer with us!

We met our goals for Northern Lights, learned a ton and had a blast. We have 5 1/2 week before North Star – who knows what we can do there!

No one has trouble finding us in the stands this years, with our distinctive purple tie dye shirts, and purple hair 🙂

After 12 hours of work, a fast weight loss program to reduce total weight by 8 pounds, and substantial work on the elevator and lifter arm, Helios passed inspection at 7:59 pm last night, just in time for Friday’s qualifying matches.

What caused these purple hands? Find out tomorrow.

We made it to Duluth! After a chilly ride and load-in, we’re ready for the regional to begin tomorrow morning.

It’s been a busy week in our shop! The Ann Bancroft Foundation, who awarded grants to four girls on our team, came to film the girls in action, along with the rest of the team.

Sol can pick up totes. Helios can pick up recycle bins. What will it take to merge them into one?

Our CAD team has been hard at work, creating virtual designs of all of the prototypes. On January 17th we sent the designs for the chassis, or frame, to Quality Tool. We hoped to get the frame back on January 26th. Here’s where the real world challenge comes in. An expensive piece of machinery at Quality Tool broke this week, putting our project (and rather a lot of other stuff) way behind schedule. Real world challenge? Yes. Fun? No. But our team has risen to the challenge. Alpha bot came on line last night – a quick and dirty prototype that is helping us test our wheels, drive train, programming, and new electronics system. 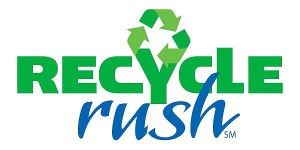